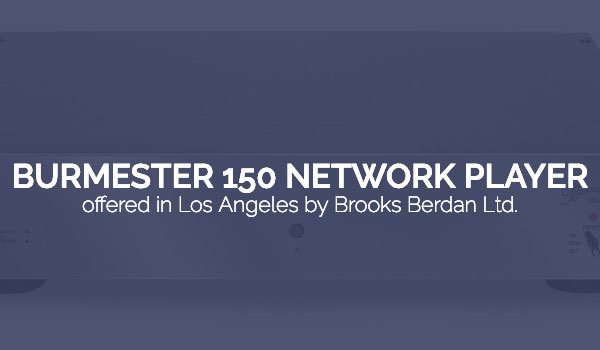 The 150 Network Player convinces by its outstanding sound qualities and the exceptional processing speed even of large data volumes. It can be operated with a fi xed output level in existing systems on a preamp or with a variable output level directly connected to a power amp or active loudspeakers.

In addition to playing music from a UPnP server the 150 Network Player can also:

Apart from the lessons we have learned from the development of the previous Burmester network products and the experience gathered since the market maturity of these products, we have especially taken into consideration the ideas, wishes and suggestions of our customers to develop a device which ensures the greatest acceptance and customer satisfaction.

ANALOGUE VOLUME CONTROL
One of the core elements of the 150 Network Player is its analogue volume control. As opposed to the widespread digital level control, which is also realised much more easily, this one offers the essential benefit of preserving the full resolution of the music without data reduction even at the lowest volume levels.

Due to the increased output voltage in the variable level mode there is no need for a separate preamp, because its gain stage has already been integrated into the 150 Network Player. Therefore the 150 Network Player may be connected directly to a power amp or active speakers. In combination with a Burmester server the analogue volume control enables the 150 Network Player to level volume jumps between the individual tracks of a playlist without modifying their original dynamics. The volume of each single track is determined during the ripping process according to a listening scheme for medium levels and saved as a correction factor in an internal database on the Burmester Musiccenter. When a track is played back, its corresponding correction value will be loaded by the 150 Network Player and fed into the analogue volume control.

SOPHISTICATED ANALOGUE CIRCUIT TECHNOLOGY
The 150 Network Player has a fully DC-coupled signal path without capacitors resulting in a precise bass reproduction due to the nonexistence of phase shift in the audible range.

SOFTWARE The entire software for operating the 150 comes from the Burmester R&D department. This is why the whole software consorts perfectly with the main board of the arithmetical unit which was custom-modified according to Burmester specifications.

OPERATION The 150 Network Player can be operated in several ways. The essential basic functions may be controlled via the included infrared remote.

Thus you may e.g. adjust the volume or halt the playback by a simple touch of a button without having to call up a menu. Furthermore the 150 Network Player can also be taken from standby to operation mode with the infrared remote control.

The complete operation of all functions is done via the iPad® app or with the web interface. Both applications are also developed in-house entirely.

DESIGN Owing to the clear lines and the typical chrome front, this product high-light incorporates the timeless design vocabulary which Burmester devices are known for. Thus the 150 Network Player blends in perfectly with the range of Burmester components, both visually and soundwise.

NETWORK AND WLAN The 150 Network Player features an ethernet socket (to connect the 150 to an existing non-wireless network) and an integrated WLAN card which is fitted with two antennas. Both antennas are permanently run in parallel so that the stronger wireless connection can be used at all times. That way radio cancellations due to multiple reflections are avoided.

With the built-in WLAN card the 150 can serve as access point for wireless devices such as the iPad®.

FUTURE-PROOF THROUGH WEB ACCESS In addition to the possibility of obtaining future updates via the internet, other web services and content suppliers may also be included. This option allows to supply the customer with the latest features.